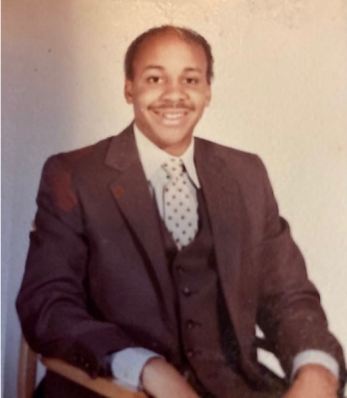 Lawrence “Larry” Ward died at age forty-three after a long and heroic battle related to a diagnosis of brain cancer at age fourteen. Larry was the devoted and loving husband of Brenda Maier Ward for almost seventeen years. They meet when they were both employed at the Menand’s Workshop in Albany. They were the first married couple in the Wildwood Supported Living Program. Larry and Brenda had such a special love and commitment to each other – a love that overcame their disabilities and racial differences, setting an example of true love for all.
Larry was born on June 8, 1966, in Albany, New York to the late Lawrence J. Ward, Sr., and Mikki Ward-Harper. He is the stepson of Edward W. Harper. He was a graduate of Columbia High School in East Greenbush, New York. Prior to his illness, Larry stood out as a promising and outstanding athlete in baseball, basketball, football, and track and he was an honor-roll student, as well.

He was employed following high school at various sheltered employment opportunities, but Larry’s greatest joy was spent as a volunteer “coach” to the Columbia High School Basketball teams. He missed very few games. He received special recognition and a plaque thanking him for twenty-five years of service to the Columbia Basketball program. After his passing, he received posthumous recognition from the Rensselaer County Legislature for his dedication and service to East Greenbush and the East Greenbush Central School District.
Larry truly loved life and never complained about how his disabilities created limitations for him. His smile and his laugh will long be remembered by those who knew and loved him. He was a true inspiration to many. His mother told him right before his passing that he was the bravest person she had ever known in her life. 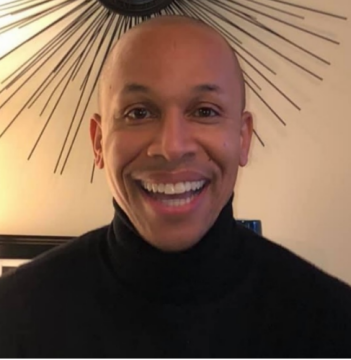 Jasán Maurice Ward was born on January 15, 1972, in Albany, New York. He joined his older brother, Larry, in heaven on March 19, 2021.
Jasán shared his birthday with Martin Luther King. This carried a personal significance for him. He believed that it was important that he lived a life in honor of the man he revered. His life was purpose-driven and he possessed a passion for art, music, dance, fashion, and the written word. He strongly believed “to whom much is given, much will be required (Luke 12:48).” Jasán grew up in East Greenbush where he attended elementary and junior high school. His high school years were spent at the Albany Academy for Boys where he excelled academically and
developed leadership skills. He was a “Tri-Captain” as he was captain of the Band, Swim Team, and Track Team. Aside from winning National Latin and French awards – at graduation, he received the U.S.S. Cruiser Award. This is the highest award given to the student who most exemplifies what an Albany Academy cadet should be. He went on to Cornell University but in his senior year had a major life crisis and injury that curtailed his studies.

He began his professional work in 2001 as a Case Manager at the AIDS Council of NY. It was here that he first began what would be a lifelong calling of providing support to the underserved and especially the LGBT, people of color, and people living with HIV/AIDS.
From December 2006 – May 2007, he took a brief hiatus from Human Service work and spent time living with friends in Montreal. While there he attended the ILSC-Montreal, University of Cambridge CELTA Program, an intensive six-week course designed to produce Certified English as a Second Language (ESL)Teachers for Adults. Being fluent in French he was certified to teach adult students English in either English or French. In May of 2007, he began working at In Our Own Voices, a nonprofit dedicated to creating positive changes by promoting the health and wellness of Lesbian, Gay, Bisexual and Transgender people of color. He gained experience in program development, grant writing, creating, and delivering
educational and training programs, fund-raising, and coordinating major community events and conferences.

In November 2012 Jasán started working in New York City at the MOCHA Center where his position was the Capacity Building Manager for the Taskforce on Black Gay Health. When the funding for the position in New York City ran out the MOCHA Center transferred him to their Rochester, NY office. He served as the Manager of Prevention Programs and ultimately as the Senior Director of Programs & Evaluation. He provided training, and workshops and developed major conferences for a broad range of Health & Human Service Providers. This increased their cultural
awareness and sensitivity enabling them to provide more effective services to the target populations. In 2012, he was named an “Emerging Black LGBT Leader” and was invited to a policy briefing addressing HIV and other issues affecting the LGBT people of color communities at the White House. He was invited back to the White House in 2013 and 2014 to meet with Senior White House staff concerning the National HIV/AIDS Strategy. He also became a spokesmodel for the HIV STOPS WITH ME campaign in 2014. He also served on Community Advisory Boards
related to HIV & Cancer, and HIV Vaccine Trials and was a trainer for the National Coalition Building Institute and the Trevor Project.

From 2015 to the beginning of 2018, Jasán stepped away from human services to work as the Communications and Development Associate for the Garth Fagan Dance Company in Rochester, NY. He was there for their 45th Anniversary Season 2015-2017. He returned to the Albany, NY area in early 2018 to fulfill his goal of working for the New York State Department of Health, AIDS Institute. He began at the AIDS Institute as a Health Program Administrator/Contract Manager in the Bureau of HIV Ambulatory Care Services, managing various contracts/programs in several parts of the state. He was promoted the next year to the position of Program Coordinator for the Office of Planning and Community Affairs in the Executive Office. During his last months at work, from a hospital bed in his living room, Jasán coordinated the programming for the first-ever “Virtual World AIDS Day and Ending the Epidemic Conference.” Charisse Williams, who became friends with Jasán while they were at Cornell, published a book entitled The Joy of Thriving While Black. Jasan’s story is the chapter on “Joy.”

Eligibility Criteria:
1. Evidence of potential leadership ability as demonstrated by participation as a leader or
officer in school or extra-curricular organizations.
2. Academic achievement as evidenced by attaining a B or 3.0 average, or 2.75 average if
coursework includes 2 or more AP level courses.
3. Participation in sports at the varsity level.
4. Participation in any area of the arts.

TO APPLY TO THE LARRY & JASÁN WARD SCHOLAR-ATHLETE AWARD SCHOLARSHIP CLICK ON THE APPLICATION BUTTON BELOW.